A chronical of the laughter, revelations and transformations that are possible when you embrace the crazy

While I’ve made references to my other life as a storyteller on this blog, I haven’t directly talked about it…

So, yeah, I have this other part of my life, outside my blog and outside my office, in which I’m a storyteller.  But not just in the sense that I make even the smallest moments of my life into a story that I force my friends, and strangers in elevators, to listen to. But as in, I get on stage (occasionally), and tell carefully crafted, true stories from my life in front of hundreds of people.

I am also a teacher with SpeakeasyDC so I can help people who learn how to turn their lives into entertainment, which is super fun and rewarding for me.

But recently, I had the opportunity to direct a storytelling ensemble show. I was actually co-directing with a woman who has directed a handful of these shows and who has been performing and coaching storytellers for way longer than I have. I wanted to learn from the best.

I learned lots of technical and philosophical stuff about being a director and balancing the needs of performers with those of the venue and those of the organization and my own ego. But that’s what I was expecting to learn. And I’ll write about that in another post some other time.

What I didn’t expect to learn, was how much I loved directing. I loved the process of moving from the auditions to the first rehearsal, through subsequent rehearsals to opening night, watching the stories transform and deepen and take unexpected turns.

By the time we were done, I had listened to each story at minimum 8 times. And yet as I sat there on the second and final night of the show, I still got goosebumps, I still laughed out loud, and I still felt my heart melt at these stories – often in new ways.

I realized what an honor it is to be allowed to help someone craft an autobiographical story, and that these tellers, most of whom I met for the first time at their auditions, trusted me enough to open themselves up to me and allow me inside their story.

Coaching storytellers for an ensemble show is a little different from helping a student get ready for their show case at the end of the course. In an ensemble show we have to balance each individual story arc and tone against the arc and tone of the entire show. We have make sure the stories stay unique enough to show a range of experiences around the subject (in this case, the show was called Sucker for Love, and all of the stories were somehow related to the topic of love), while still feeling cohesive. We want humor as much as possible, but without losing heartfelt moments and those beautiful moments that bring an audience to baited silence.

The process of helping each storyteller craft their stories is one  that requires me to be objective and sort through the details of their stories and decide what is interesting, what is pertinent, what is useful. It’s a delicate job, and one I tried very hard to do well.

I came to think of the cast as “my storytellers”, and found myself with growing maternal and protective feelings for everyone. I was as nervous as each one took to the stage as I would have been if I was the one performing.

And when they finished, I was more proud of them, and proud of myself, then I’d ever been after one of my own performances.

Let me repeat that, because I had to say it to myself a few times to get it: I felt more pride and satisfaction at the completion of this show I co-directed, than I had ever felt after a show I’d performed in, even on the rare occasions when I killed on stage.

Turns out, I’m a behind the scenes sort of girl.

I’ve always known that I’m not a natural or gifted performer. Not like some of my storytelling friends, who can hold an audience in the palm of their hand and sound as if they are coming up with the witty one liners and hilarious observations on the spot.

I mean, I do ok, I’m not what anyone would call a bad performer, but I’ve never fooled myself into thinking performing is my “thing.”

And while I’ve enjoyed the attention, and the adrenaline of being on stage, I’ve never really loved it, or thrived on it the way many of my storytelling friends do. I have to work really, really hard, put in many, many hours to get a story to the place I want it to be when I get on stage, and even then, I’m never fully satisfied. And the more I perform and don’t meet my own expectations, the less motivated I am to put in the work, which makes for less than perfect performances, and so on and so forth.

But now that I’ve experienced directing, I don’t feel bad about that anymore. Now I know that I’m meant to be behind the scenes. I’m still planning to perform occasionally, but just because its hard to teach/coach/direct others in something you don’t do, but I’m going to stop thinking of it as the centerpiece of my storytelling life.

In addition to directing this show, I was also the host for the first time. This meant that I did a quick story at the beginning of the show to warm the audience up, and then I introduced each storyteller, made sure their mic was adjusted correctly, made announcements, hyped upcoming shows, and things like that. The host can go a long way toward setting the tone for the evening (good or bad), keeping the energy up or down between stories, and giving new people a general impression of SpeakeasyDC- whether we’re organized, fun, something they want to see again, etc.

Before each of the two shows we did, I couldn’t decide where to focus my nervous energy – on performing my story, or the responsibilities of being a host. It was disorienting and I think (though no one in the audience would admit it), that it showed in my performance on the first night. On the second night, I had found my groove and did much better. And fortunately, the second night was when the video and photography people were there.

I did learn that I enjoyed hosting more than I thought I would though, so there’s that.

And this story is no exception. Take, for example, my outfit on this night. I left my cardigan unbuttoned because it was baggy and when it was buttoned up looked kind of shlumpy. And I thought the white bisecting the pink was a nice pattern.

In my mirror, I looked stylish and slim.

On film it looks like I’m too fat for the sweater to close. It looks like the sweater is two sizes too small. Maybe because the sides got caught on my pants and pulled back? I have no idea, but I’m never wearing that outfit again. Ever.

Fortunately, there were a few photographs where I looked pretty close to how I understood myself to look, and that might be the only reason I’m not throwing out my mirrors. And if I show you one, it makes me feel better about showing you the video. 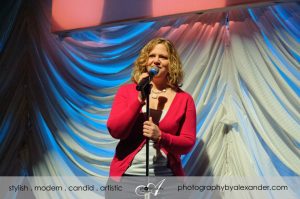 This is me, doing the host thing

Also, in the video my hair looks like it’s in my eyes. But it wasn’t in real life. Part of the problem is that the camera was up above pointing down. That’s my story, and I’m sticking with it.

But all of that said, I do like my story, mostly because it’s about Chris. And that’s also partly why I’m willing to share it, because I think it’s a cute story. It’s not hilarious, it’s not a tear-jerker, it’s not going to change your life. But it is cute and sweet and I’m perfectly OK with that.

So, now before I let you see the video, I have to set the stage a little. What you’ll see when you click youtube link at the bottom of this post is me performing my story about the first time Chris met my family. What you won’t see is that as soon as I finished, the lights went dark and a picture of me and Chris flashed on the screen. It looked like this:

and the chorus of  “If Its Love”, by Train played, which sounds like this: (chorus starts around 1:02 on this video)

So after you watch the video, think of the picture going up and the song filling the silence. It was my favorite part of my performance. You might want to have the Train video up on your computer, cued to the chorus, and then click over to it as soon as my video stops, to get the full effect. Not that I’m trying to direct every aspect of your experience, I’m just offering ideas.

And after you watch my video, I REALLY hope you’ll also watch the other stories, because for me, that’s where the real magic for the night happened.

If you don’t see the other videos at the bottom of the screen when you watch mine, you can find them here.

And just cause I’ve got em, here are some other pictures from that night:

Me and my brilliant co-director

5 Responses to “If Its Love”